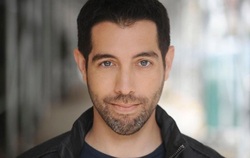 Jose is a graduate of the American Academy of Dramatic Arts. He has been seen on Broadway in "GREASE" (Sonny LaTierri) and Off-Broadway: “PETER AND THE STARCATCHER” (u.s. Black Stache/Smee/Fighting Pranw/Alf/Mrs. Bumbrake). National Tours include "SATURDAY NIGHT FEVER" (Gus), "FAME - THE MUSICAL" (Joe Vegas). Regional credits include "REEFER MADNESS" (Jack/Jesus), "SIDESHOW" (Roustabout). Jose has been in TV/Commercials for ROLLING ROCK, MILLER LITE, SEARS, TOYOTA. 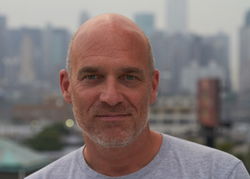 Steve Friedman has been working and living in NYC since 1987 when he joined Equity by touring with Pushcart Players in NJ. Early theater work included HUNG, directed by Michael Imperioli, a stint in the long running off-Broadway hit BEAU JESTE and many productions with Circle Repertory’s LAB Theater. Aside from working on AMERICAN LESION, THE NEXT KARATE KID, and SULLIVAN'S LAST CALL, Steve  became the corporate national spokesman for SYMANTEC/PETER NORTON UTILITIES, traveling here and abroad to perform in trade shows and live presentations. He continues to work contracts in just about every arena, including live theater, live and taped industrials, film and television, commercials and voiceovers. He is currently the voice of Crest Pro Health and Miralax, among others. In addition to coaching and teaching, Steve developed Able To Leap Films, a production company specializing in short films. Visit abletoleapfilms.com and stevenmarkfriedman.com. 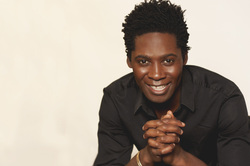 Bernard is a NYC based actor that has been featured in more than a dozen theatrical productions and films. He helmed the lead in Sheron Dayco's movie project, TELEGRAM and has also had roles in BEST WORST DAY, LAST CALL BEFORE SUNSET, LIKE THIS and LAYLA'S MILLSTONE.

Kat Scicluna is an actor and entertainer trained in improvisational comedy through the long form program at Upright Citizens Brigade. She has combined her professional training in improv, vocals and dance in a variety of mediums including theater, film, and television as well as in the world of magic where she has joyously vanished into thin air and dodged swords for nearly a decade as a magician's assistant.

Lynn McCune has a B.A. in Theatre Arts from Mount Holyoke College, and is a proud member of Actors Equity and SAG-AFTRA. Her on-camera experience extends from industrial videos, to a dramatic re-enactment in The Discovery Channel’s “A Haunting,” and a very silly scene in the John Waters film, “A Dirty Shame,” dappled with various indie film roles. Voice-overs include industrials, commercials, and a video game. She is thrilled to have been chosen to provide the voice for Rosalind in Foster Dog! She's more of an entertainer than a care-giver, and has enjoyed being Auntie Lynn to her friends' pets. She has the greatest respect and appreciation for those who have fostered and adopted, and is honored to have this opportunity to help raise awareness of foster programs through Foster Dog. Lynn is also an accomplished Big Band vocalist, currently singing with The Stan Rubin Orchestra at private events, and at Swing 46 Jazz and Supper Club in NYC every Wednesday night. 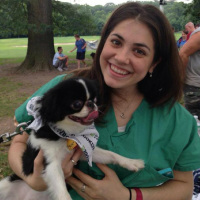 Dr. Bell made the decision to become a vet at 5 years old after watching a popular TV series on animal hospitals in the UK. Her veterinary training was undertaken in Scotland at the University of Edinburgh. Aside from her 18 months practice in the UK as a General Practitioner,  she also worked for a film company as their on-site veterinarian on various productions. When this quirky young Londoner moved to the Big Apple to pursue a 12 month rotating internship, she ended up falling in love with NYC so much that she stayed! Her professional interests include soft tissue surgery, internal medicine and working up ophthalmology cases.

In her free time she enjoys staying active through diverse activities such as running, yoga and kickboxing. You can find her out and about exploring the city and trying to find as many “off the beaten track” cubby holes as possible.