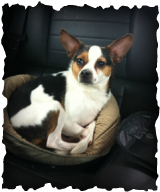 Finnegan portrays our main character, Henry, who is wishing for his furever home.

He loves wind chimes and strolls along the Capital beat and is a laser light fanatic.
He hopes to inspire thousands of dogs and other companion animals with disabilities with his performance. 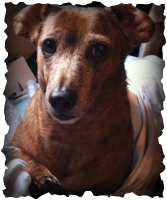 Rochester is portrayed by the handsome 8 year old dachshund (also named Rochester, after the character from The Jack Benny Program).

He loves traveling, playing with his soft plush toys and especially eating! He is learning to enjoy his current low fat diet. He currently lives in New York City with his humans, one of which is the writer/director/producer and the other portrays the Dad. 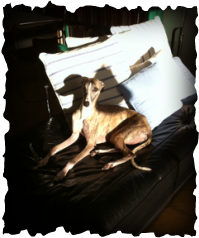 Bentley is portrayed by Dziga, a bold and lively Whippet ready to take on the world. His goal in life is to make people happy and to chase anything that runs from him. Anything.

Dziga's favorite past time is running through the woods chasing things that could easily eat him. He also enjoys short strolls through the Union Square Market and lives for food, especially the kind that will upset his stomach and send his parents rushing out the door with him.

He resides in New York City with his humans.
He is working on his first novel, The Thrill of the Chase. 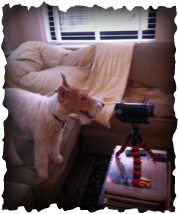 Duffy has a "non speaking" supporting role in the short, however, he was very influential in shooting our fundraising campaign video for Indiegogo, for which we are all eternally grateful for his magnanimous support.

Duffy enjoys helping out with chores around the house, especially laundry, relaxing in the park, provided there are no skateboarders around and strolls along the pier.

Although he has appeared in previous shorts, he anticipates a career change to behind the camera and is planning to relocate to Chicago.

Kino portrays the snobbish dog (eh, hmm, is that uncharacteristic of a Shiba Inu?) in the dog park, a small but pivotal role, at least that's what we told him in order for him to agree to let us use his likeness on film.

Kino enjoys being left to his own accord. When he wants your attention or approval, he will let you know. Kino enjoys lounging about his studio apartment and letting the humans dote on him at his leisure. 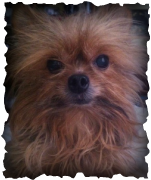 Esmeralda, named after the gypsy seductress of The Hunchbank of Notre Dame, plays the small, yet feisty Rosalind in our short film. Unlike her namesake, she is not one to bring water to the poor or helpless.

Esmeralda has been enchanting audiences for years with her indoor hunting escapades and stuffed toy savagery. Now she is eager to play a sassy counterpart to her onscreen and off screen brother.